Since January 2009, Bosch Rexroth NL has been using SAP HR for personnel administration (PA) and payroll (PY). Transcriptum was involved for the data migration.

For this data migration project, DataTranscript was used as a method and tooling along with a MS Access application
for organizational data) and LSMW (to import data into SAP. The use of method and tooling will be explained below.

The image below depicts the data migration process from PView/Raet to SAP.

In addition to PView and Raet, numerous Excel sheets at the user department were also imported into the conversion tool.

The DataTranscript method and tooling are also used to support data cleansing. Based on requirements of the SAP HR system, quality definitions have been set up in DataTranscript which result in incorrect data being blocked and warnings being given of any suspect data. Subsequently, incorrect data is corrected in the legacy systems by the user department. In this way, the risk of SAP HR being loaded with incorrect data is minimized

Organizational data (Departments, Cost Centers, Positions) follow a somewhat different route and must be entered into WOM (the worldwide Bosch master data for Departments, Positions, Cost Centers). Subsequently, the position numbers from WOM are being used to maintain OM integration (InfoType 0001) in SAP HR. At Bosch Rexroth, there was no complete and correct organizational model. Therefore, a new model was built, based on the information from PView and enhanced with information from Quality Management and the HR Business Partners. To facilitate this process, a dedicated MS Access database was created (“BROM” as in Bosch Rexroth Organizational Model). The information in BROM was entered into WOM manually. The Position numbers (assigned by WOM) were entered into BROM. See the image below.

Subsequently, the WOM Position numbers were migrated from BROM to SAP HR. The complete picture is as follows. 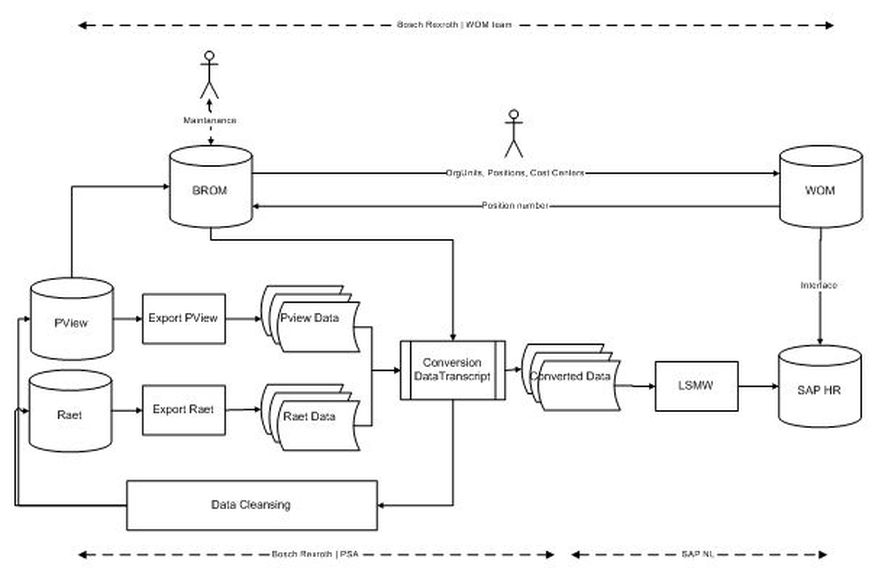